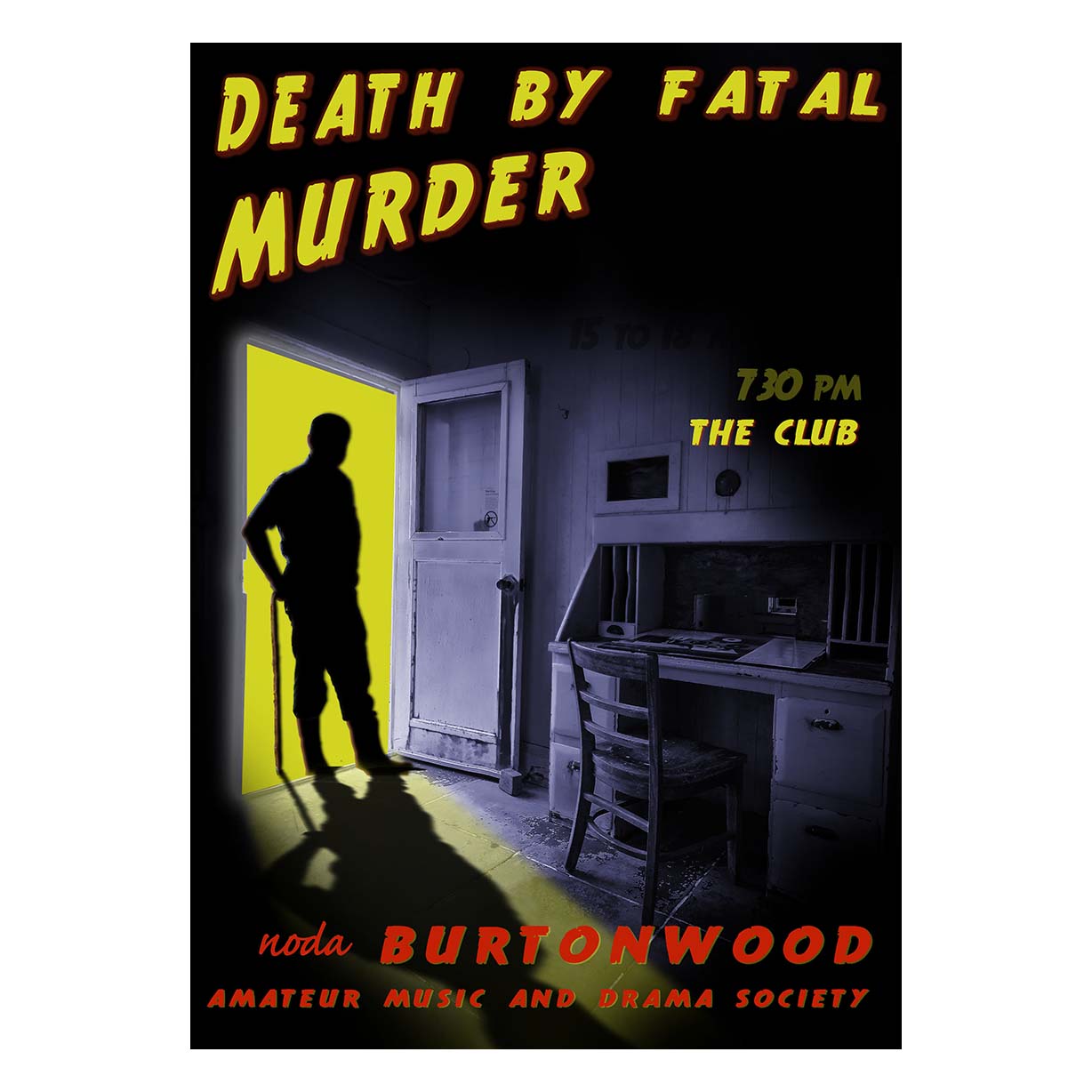 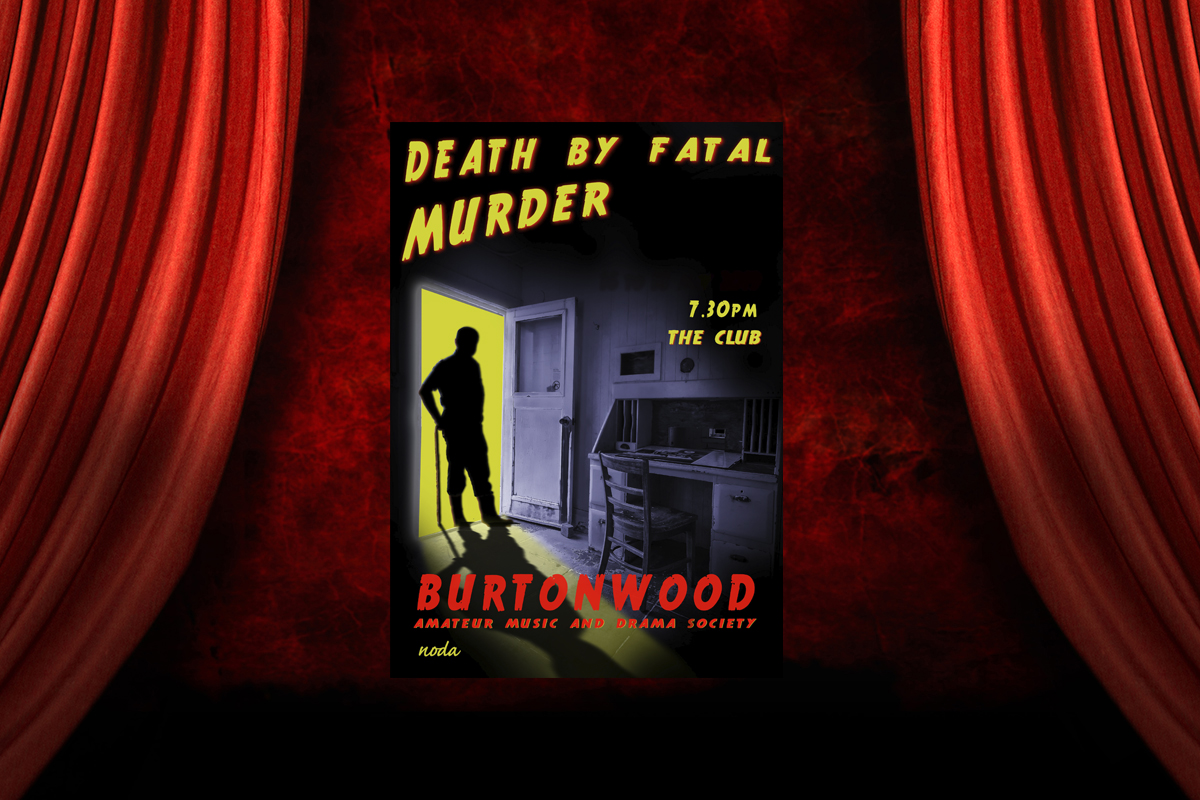 Inspector Pratt’s record of crime detection at Bagshot House in not enviable. In his two previous visits, chronicled in Murdered to Death and Secondary Cause of Death, the body count mounted disastrously as he looked on, helpless and hopeless! Now he is back and, as usual, chaos reigns supreme.

During the course of his latest investigations, Pratt meets the new owner of the house, Nancy Allwright and soon he is embroiled in more mystery, aided and abetted by Miss Maple and Constable Thomkins. Upper-crust Ginny and Italian gigolo Enzo help with enquiries but danger soon looms with an unexpected arrival, and a frightening suggestion by Welsh busybody, Blodwyn Morgan.

Burtonwood AMDS opened their 2019 season this week with their farcical comedy Death By Fatal Murder, by Peter Gordon. This fantastic script is a great showcase for any society as it gives a great opportunity to explore character, as well as conveying both comedy and farce. The action takes place in Bagshott House in 1940’s, a country estate owned by the late Colonel Craddock, where several years ago a murder took place and was investigated by the bumbling Inspector Pratt. This time, a police constable has gone missing in the house and Inspector Pratt has been called in to investigate – cue the farce!

This play was directed by Judith Maffitt. Most of the action takes place within one location, with references to the house next-door and the adjoining rooms to the guest house. Being a farce, the timing needs to be perfect and most of the physical elements to the farce in this play were very well rehearsed and set up. I particularly liked the physical comedy moments from Inspector Pratt. The direction was evident and the story telling was particularly very good in this play. It was easy for the audience to follow, and at times, the audience were two steps ahead of Inspector Pratt – who wasn’t the sharpest tool in the box! There were a few points in this piece when the actors were upstaged or were talking up-stage, but I fear this was down to the individual performers rather than direction. The time period changed throughout this play, with references to it being midnight, however the clock on the wall stayed at 6:10pm throughout. Visually, the whole piece looked really good and was very pleasing to the eye. Well done Judith!

The technical elements to this play were good. The lighting cues were on time and the quality of the sound was good. I would’ve preferred to have heard some 1940’s music during the scene changes and during the interval etc but this is just a personal thought. The costumes were also very good and apt for each character. One character had a modern hair bobble on her wrist throughout and a few of the ladies had on modern make-up, with contouring etc which looked slightly out of place, but I doubt any of the audience would’ve noticed this.

The set was particularly excellent. It was obviously very well constructed so a special mention must go to Brian Maffitt and Tommy Leonard for their obvious hard work!

The protagonist of this piece was the idiotic Inspector Pratt, played brilliantly by Rob Minjoot. Rob was very funny both vocally and physically. He stayed in character throughout this piece, even when he lost his words. He made this part very funny and very believable. I felt really sorry for his character and Rob did well to quickly get the audience on his side. This brilliant script really lends itself to quality comedy and Rob’s interpretation of Pratt was brilliant. There was a hell of a lot of dialogue for Rob to learn and he did very well with this. For me, Rob was the star of the show – well done Rob!

Nancy Allwright was played by Maryanne Gleeson. Maryanne did well to set up the opening of the play and was intriguing to watch. I could tell that Nancy was embroiled in the plot somehow. I would’ve preferred a slightly more pace and energy to her characterisation to enhance the overall comedy and pace but I’m being very picky.

Ginny Farquhar was played by Bianca Tranter. A smaller part, but Bianca displayed great energy and commitment to character, I would’ve liked to have seen more of her! Bianca had excellent diction, articulation and projection. I liked her styling of her costume and she was very well cast in this role. Bianca was one of the characters with modern contouring in her make-up which looked slightly out of place. Bianca had a great rapport with others on stage with her and gave a lovely performance.

George Goddard played the role of Constable Thomkins. George played the role well and was very good with his cue lines. He also has a nice stage presence and helped with the overall pace. I felt that his character was a little two-dimensional at times. It would’ve been nice to see on his face how he really felt about Pratt behind his back, or the stolen glances with Nancy etc. There is a lot more in the subtext of this complex character that was missed. Saying that, George was well cast and very likeable.

Lavinia Lunt played the role of Joan Maple. Miss Maple, (I suspect is based on Miss Marple), is the sleuth of the piece who helps to work out the ending (with a plot twist of fraud). There is a lot of depth to this character and lots of ways that it could be interpreted. I found that Lavinia’s version of this character wasn’t very apparent due to the fact that Lavinia was searching for the words throughout the whole play. There were numerous times when the prompt was used which stopped the characterisation.

Pauline Taylor played the role of Blodwyn Morgan – the amateur medium who can connect with the deceased. Although Blodwyn also had a few memory lapses with the script, her energy and commitment to the role was brilliant. Farce needs pace for it to work and Pauline brought a much-needed pace to every scene that she was in. I liked her characterisations of each of the personas of the dead. Pauline has a great ear for accents too and her projection was excellent. I look forward to seeing Pauline in a future production!

Enzo Garibaldi – the suspicious Italian, was played by Brian Maffitt. Brian’s Italian accent was so bad that it was really funny. I’m not sure if this was the intention or not but it added to the overall comedy all the same. His wig was equally as bad and equally as funny too. I felt that this part should’ve been played with someone a little younger and that Brian would’ve been more suited to the role of Squadron Leader Allwright but Brian was very entertaining nevertheless.

Squadron Leader Allwright was played by Arran Abbey. I was a little underwhelmed by Arran’s performance. Whilst he looked the part in his brilliant costume, Arran repeatedly came out of character and corpsed slightly during scenes. I also felt that his characterisation was a little laid back for that of a Squadron Leader too.

Overall, this play has the bones of being excellent. The script is very funny, and this version was nearly there. Unfortunately, the prompt was used far too many times which hindered both pace and characterisation. Despite it being opening night, I felt that the cast needed a few more weeks to perfect the words. If so, this would’ve been an outstanding piece of theatre. Despite the prompt, the play was still very funny and entertaining to watch. Two of the ladies on the front row were laughing so much I thought we might have to call an ambulance! If that’s the way the audience were reacting on the opening night, then I fear for the ‘death’s by fatal laughter’ on the closing night!

Well done to Burtonwood AMADS for a lovely night’s entertainment. I thank them for their fantastic hospitality and wish them all the best for their 2019 season! 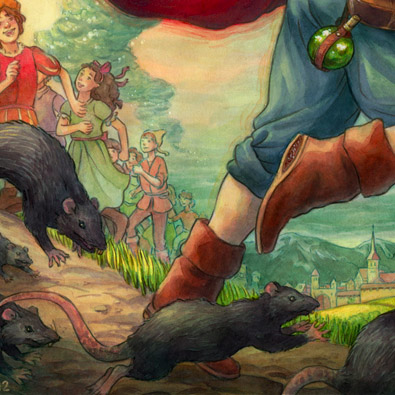 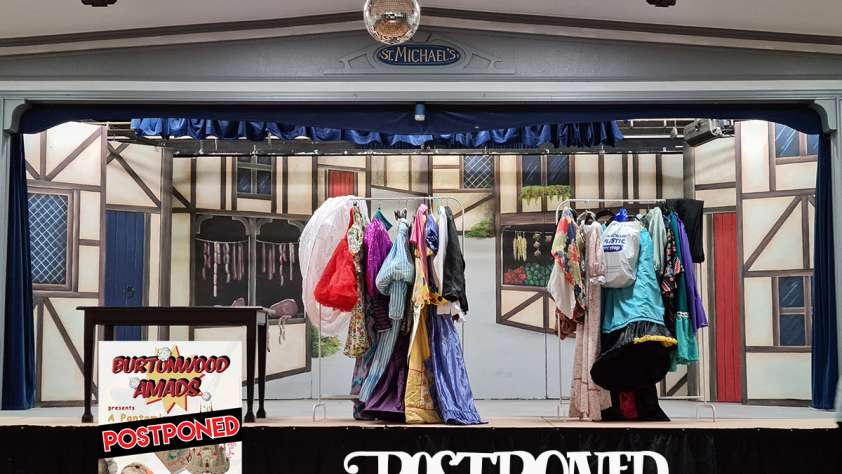